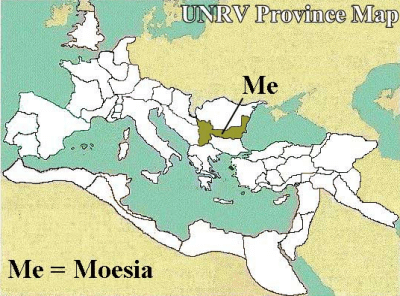 The Roman province of Moesia, mainly modern day Bulgaria and Serbia, was a stretch of mountainous terrain in the west and more fertile plains in the east. It bordered Macedonia and Thracia to the south, the Black Sea (Pontus Euxinus) to the east and shared the Danube as a border with Dacia in the North.

The region was initially inhabited by Dacian tribes, but were mostly supplanted by migrating Thracian Moesi tribe people in the mid 1st millenium BC. These Thracians would eventually come to dominate the territory.

Roman interest in Moesia was prompted by the realization of the rich mining and fertile fields that it had to offer. In 75 BC, C. Scribonius Curio, proconsul of Macedonia, in expanding territory and protecting Roman interests, penetrated as far as the Danube. The Romans gained victories as they went, but would only stay a short time, leaving the area out of Roman control. Little is really known about these early expeditions or the formal declaration of Moesia as a province, but after the ascension of Augustus the conquest was completed.

During his reign, Augustus commissioned Marcus Licinius Crassus, grandson of the original Caesarian Triumvir, serving as proconsul of Macedonia, to subdue the local tribes and brings its wealth under Roman influence. By 29 BC the campaign commenced and the Moesi and Dacian residents were defeated, seemingly by 6 AD. It is this year, according to Dio Cassius, that the first actual governor of Moesia is recorded, Caecina Severus.

Moesia was initially developed as a single province, but the different challenges in terrain and size prompted Domitian (85 AD) to the divide it into two: Upper (superior) and Lower (Inferior, also called Ripa Thracia) Moesia. Moesia was not only rich in mineral wealth in the west, and grain in the east, but served as an all important buffer between the Greek provinces and various potential invaders.

The primary settlements of the provinces were Singidunum (Belgrade), Viminacium (sometimes called municipium Aelium, both major legionary outposts on the Danube, Bononia (Widdin), Ratiaria (Artcher): Naissus (birthplace of Constantine), Oescus (colonia Ulpia, Gigen), Novae (near Sistova), Nicopolis ad Istrum (Nikup), Odessus (Varna), and Tomis (Constanta). Of these, Tomis was interesting in that it became the place of banishment for the Roman Poet Ovid. He was banished by Augustus in 9 AD, for seemingly disagreeable poetry, where he lived until his death in 17 AD. Ovid painted a bleak picture of Tomi and Moesia, claiming it was a violent and uncivilized place, obviously far different than what a highly cultured artist would be accustomed to.

Romanization of the Moesian people, being a volatile border province, was far less observed than in other more peaceful concerns, but the people seemed to settle in under Roman rule without a great deal of trouble over the years. While Ovid's descriptions must be measured by his prejudice, it is evident that the province was under constant pressure from Germanic Goths, Scythians, Sarmatians and other regional migrating tribes. The permanent legionary garrisons may have contributed to the lack of trouble from within.

In the early 2nd century AD, with the conquest of Dacia by Trajan, Moesia likely got some relief from these external pressures. Dacia, however would not remain long within Roman control and the pressure would once again fall to Moesia. Aurelian (270 - 275) AD) abandoned the Dacian conquest to the Germanic tribes, moving Romanized Dacians south of the Danube. At this point the province was renamed Dacia Aureliani to reflect this, and was again divided between upper and lower territories.

The Goths, who were the major source of conflict for the Romans in the area, crossed the Danube, for the countless and final time, under their King Fritigern in 376 AD, under pressure from the Huns themselves. The Emperor Valens, seeking to maintain the peace and avoid losing the province to the Goths, allowed them to settle the region in exchange for defending it from the Huns. Terms were disagreeable, however, and the Goths, feeling as fodder for Rome's legions, soon broke the yoke of Roman control. In 378 AD, at the battle of Adrianople, in modern day Turkey, Fritigern and his Goths destroyed the army of Valens, and Moesia passed forever out of Roman dominion.

As already mentioned, Moesia was a province of volatile activity. A frontier province bordered by the Goths, the region required the constant presence of several legions. For the bulk of the Roman occupation, Moesia was home to 4 legions-- Legio I Italica at Novae and Legio XI Claudia at Durostorum in Inferior, and Legio IV Flavia at Singidunum (Belgrade) and Legio VII Claudia at Viminacium in Superior. The province was also home to the fleet of the Euxinus (Black Sea), the Classis Moesica at Noviodunum.

The Danube, thanks to legionary engineers, became a a vast network of fortifications stretching from the Rhein in Germania all the way to the Black Sea. This province not only served as a border protecting interior provinces, but was the source of vast mineral wealth requiring important occupation of force.

The mountainous stretches of Moesia Superior, to the west, were rich in several valuable metals. Gold, especially, was the key mineral resource mined by the Romans, and its high content was a key source of Roman coinage. In Moesia Inferior, to the east, the plains provided rich and fertile farmland. Under the governing of Ti. Plautius Silvanus Aelianus, in 57 - 67 AD, the province first added Moesian wheat to the grain supply. The area also contained a vast amount of pasture land for livestock, bountiful orchards and timber. Its position bordering the Black Sea and the Danube also made it an important trade hub for west to east caravans and shipments.

Did you know...
Moesia, in ancient geography, was a district inhabited by a Thracian people. It was bounded on the south by the mountain ranges of Haemus and Scardus (Scordus, Scodrus), on the west by the Drinus, on the north by the Danube and on the east by the Euxine. It thus corresponded in the main to the modern Serbia and Bulgaria.