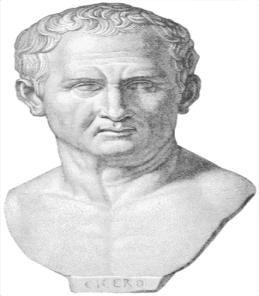 Marcus Tullius Cicero was born in 106 BC, hailing from a local equestrian family in Arpinum.

Both Cicero and Pompey, who became associates at a very young age, struggled to detach themselves from the Marian clan that held the foremost political position in the region. While both followed the footsteps of Marius to become novus homo (new men) in the Roman Senate, they did so in completely different fashions. Pompey, of course, chose the military route, paying little regard to the traditional steps of the political ladder (cursus honorum).

Cicero, on the other hand, was the idyllic Republican politician. From the moment he arrived in Rome, his career was spent adhering to the courts of law and to strict principals of traditional Senatorial advancement.

As a boy, Cicero visited Rome and received the finest literary education that money could buy. In this time, he met and became the best of friends with another equestrian youth by name of Atticus. It is Atticus who was the recipient of numerous letters from Cicero, in which many have survived as an indispensable window into the final days of the Republic and Roman politics.

In the Social War of the 80's BC, the young Cicero was beginning to follow his career path. He served under Pompey's father, Pompeius Strabo, along with Pompey and his future enemy Catilina. Cicero quickly learned though that he wasn't suited to military affairs and chose instead to pursue his career as a lawyer, orator and politician. Despite convenient and likely beneficial connections to Marius and his supporters during the civil wars, Cicero avoided using these contacts to his advantage. He clearly sided against the populares party and stuck to an early path of conservative policy. However, conservative principals didn't necessarily push him to the extremes of the Sullan camp either. During the dictatorship of Sulla, Cicero first began to gain notoriety as an attorney and orator opposing Sulla's proscriptions. In 80 BC, in the midst of Sulla's supreme authority, Cicero defended one Sextus Roscius against proscription. Making his case tactfully and in such a manner as not to offend the dictator, Cicero made a lasting impression on Roman audiences.

By the 70s BC, Cicero returned to his educational pursuits. He studied rhetoric abroad in the east, of which he would eventually come to be considered as the penultimate master. Using his oration as a base, Cicero clawed and scratched his way to prominence as a new man in Roman society. Little opportunity was available for a man with so few family connections in the ancient world, while trying to break into the elite Senatorial circles. While some gained prominence through military achievement, Cicero traveled the road of lesser glory and forced his way through the sheer force of will and conviction. At a still considerably young age, he had grown into one of the most formidable defense attorneys in the Republic, and used the prestige and notoriety from this to continually gain position.

In 75 BC, Cicero ran for his first important office, the Quaestorship. Successfully winning election he was later assigned to Sicily to oversee the grain supply. The appointment provided a unique opportunity with potentially spectacular results. The previous governor, C. Verres, was detested by the local Sicilians and they asked Cicero to prosecute him on their behalf. Verres was heavily involved in various extortion schemes to rob Sicily while lining his own pockets at the expense of others. While gubernatorial excesses in their provinces were typical in the late Republic, Verres took matters to nearly indefensible extremes (included the illegal execution of a Roman citizen without trial). Even normally conservative Senators were outraged at the apparent crimes committed. Cicero, while normally avoiding the potential enmity that a prosecution could create, agreed to take the case. In the prosecution speech Cicero so blistered and attacked Verres that the defendant went into self-exposed exile before the trial was even over.

After his term as quaestor Cicero continued his conventional rise through the Senate. While Pompey was in the east gaining new Roman territories, in which Cicero played a major role in advocating the legality of the command, he worked diligently to make inroads with Roman aristocracy. Despite his court successes, Cicero was still viewed as somewhat of an outsider and his advocating the disliked and distrusted Pompey didn't help. Even so, he had little trouble gaining election to each political office, successfully winning the Praetorship in 67 BC. Perhaps a bit of luck, or simply being the right man at the right time played a role, but regardless, Cicero was steadily rising.

Becoming Consul was the next and highest step available, and within 2 more years Cicero would achieve it. However, the political system of the late Republic may have been continuing to erode Cicero would find himself as a center target of a conspiracy against the Senate. His old acquaintance during the Social War, L. Sergius Catilina had already been embroiled in various scandals and his attempt at open rebellion was to become one of the most dangerous in the Republic's history. Whatever was necessary to gain power, Catilina was prepared to try. During the Catiline Consipiracy, he and Cicero would come head to head in a battle for the Republic.


The Works of Cicero

Thanks in large part to Cicero's diligent letters and speeches; the modern world has a brilliant historical view of the closing days of the Roman Republic. While speeches were written the rhetoric and political bias for public consumption many surviving letters and other works tell a more intimate tale of these turbulent times.

Did you know...
Many lawyers refused to defend Sextus Roscius, being afraid of Sulla, whose influence was openly used for his freedman.

Did you know...
Cicero did not take part in the assassination of Caesar, but he applauded it.