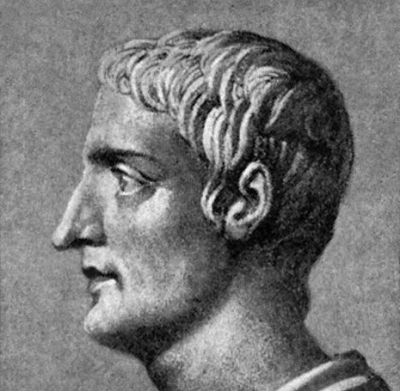 Publius or Gaius Cornelius Tacitus was a Roman historian, born into a wealthy family living in Gaul. He was a friend of Pliny the Younger and married the daughter of Cnaeus Julius Agricola, who governed in Roman Britain . Tacitus received the best education available to a Roman from a good wealthy family. Public speaking skills, oratory and debate, which were considered the most important areas of study for a young man destined for a career in imperial service or senatorial office. Tacitus was a senator during the reign of Domitian. In AD 97 he was appointed substitute consul under Nerva, and in AD 112-113 he held the highest civilian governorship, that of the Roman province of Asia in Western Anatolia.

Tacitus objected to great concentration of power in the hands of the early emperors. Though he hated imperial power and in his writings tries to paint every emperor as a corrupt despot, he hated civil war and anarchy even more. He had a particularly heavy bias against the emperor Tiberius, whom he portrayed as a sinister and cruel emperor, purging his opponents from the Senate by having them tried for treason and executed. He showed scorn for Claudius and Nero, and even his writings about Augustus contained some belittling and snide remarks. His writing is full of tales of corruption, government scandal, and innocent people being destroyed or having their good names ruined because of the emperor's lust for power. It was Tacitus' belief that the emperor had so much power in his hands that no man could occupy the throne without being corrupted by that power.

Tacitus wrote at least 16 books, but books 7-10 and parts of books 5, 6, 11 and 16 are missing. Book 6 ends with the death of Tiberius and books 7-12 presumably covered the reigns of Caligula and Claudius. The remaining books cover the reign of Nero, perhaps until his death in June 68 or until the end of that year, to connect with the Histories. The second half of book 16 is missing. We do not know whether Tacitus completed the work or whether he wrote any further associated books. Of the Histories only the first four books and 26 chapters of the fifth book have survived, covering the year 69 and the first part of 70. The work is believed to have continued up to the death of Domitian on September 18, 96. Tacitus also wrote three shorter works: the Agricola, a biography of his father-in-law Gnaeus Julius Agricola; the Germania; and the Dialogus.

The first of his works was the Dialogus [dialogue], a discussion of oratory in the style of Cicero, demonstrating to some degree why Tacitus was celebrated as an eloquent speaker; this work was long disputed, but his authorship is now generally accepted. Tacitus was primarily concerned with the balance of power between the Roman senate and the Roman Emperors. His writings are filled with tales of corruption and tyranny in the governing class of Rome as they failed to adjust to the new imperial regime; they squandered their cherished cultural traditions of free speech and self-respect as they fell over themselves to please the often bemused emperor.

Tacitus then wrote a biography of Agricola , expressing his admiration for his father-in-law as a good and able man. His small treatise De origine et situ Germanorum [concerning the origin and location of the Germans], commonly called the Germania, supplies (along with the earlier account of Julius Caesar) the principal written material on the Germanic tribes. His treatment of the Germanic peoples outside the empire is of mixed value to historians. Tacitus uses what he reports of the German character as a kind of 'noble savage' as a comparison to contemporary Romans and their (in his eyes) 'degeneracy'. Despite this bias, he does supply us with many names for tribes with which Rome had come into contact. Tacitus' information was not, in general, based on first-hand knowledge, and more recent research has shown that many of his assumptions were incorrect. In fact, contemporary historians debate whether all these tribes were really Germanic. He is also to blame for the misnaming of the Battle of the Teutoburg Forest, which did not quite take place in the saltus Teutoburgiensis, as he claimed in the Germania.

The moral purpose and severe criticism of contemporary Rome, fallen from the virtuous vigor of the old republic, also underlies his two long works, commonly called in English the Histories (of which four books and part of a fifth survive) and the Annals (of which twelve books-Books I-VI, XI-XVI-survive). The surviving books of the Histories cover only the reign of Galba (AD 68-69) and the beginning (to AD 70) of the reign of Vespasian but give a thorough view of Roman life-persons, places, and events. The surviving books of the Annals tell of the reign of Tiberius, of the last years of Claudius, and of the first years of Nero. The account contains incisive character sketches, ironic passages, and eloquent moral conclusions. The declamatory writing of the Dialogus is replaced in the historical works by a polished and highly individual style, a wide range of vocabulary, and an intricate and startling syntax. The Annals (ab excessu Divi Augusti) was Tacitus' final work, covering the period from the death of Augustus Caesar in AD 14. One well-known passage from his writings mentions the death of Christ (Annals, xv 44)'.

The Works of Tacitus

Please click on a link below to read some of the works of Tacitus:

Did you know...
Tacitus still practiced advocacy at law in 100 AD. Along with Pliny the Younger, he successfully prosecuted Marius Priscus, a proconsul in Africa, for extortion, but he felt that oratory had lost much of its political spirit and its practitioners were deficient in skill. This decline of oratory seems to provide the setting for his Dialogus de Oratoribus.