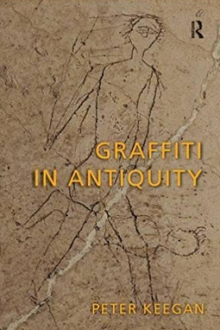 Picture if you will the scene in the dead of night, a street empty of people, a place of long shadows without noise or movement. If you're patient you eventually see a nocturnal scavenger poking around for something to eat, disturbed by the approach of the only human activity as a solitary figure heads for his wall of choice. Looking around to check no-one observes his work, the visitor prepares his paint and quickly scribes a message he wants seen in the light of day. Satisfied the work is done, he leaves, finding a dark alley to hide his exit. A scene that might sound familiar to you. It has in fact been a familiar feature of urban life for a very long time.

Graffiti In Antiquity by Peter Keegan sets out to bring to the reader a layer of communication not normally considered in the study of history. A scholarly book about graffiti? It seems very counter intuitive when the spread of multicoloured squiggles and logos are deemed as a modern problem. Graffiti in ancient times was a little different, less concerned with visual impression and certainly more literate and meaningful than the modern phemonenon. It opens a window to the expressions of ordinary people in an era when very few left any media for us to know them by.

This is not a book with a great deal of illustration but this isn't such a problem since the subject is largely textual and translated for the reader. Nonetheless the author does not ignore symbolism, nor the artistic desire to leave something more formal than suggestive. Peter Keegan summarises the evolution of written communication and its relationship with human mindset, and although he doesn't stress the point, the coincidence of written language and urban society is all too obvious.

The author focuses on three great civilizations - Egypt, Greece, and Rome. Each is given a seperate subsection in every chapter that deals with all sorts of themes, ranging from dreary mentions of commercial activity, through the plaintive and sometimes malignant desires, beliefs, and political stances, to the overt expression of sexuality. At first glance there is a haunting familiarity about the messages the ancients left, an immediacy about them, since they were writing for the moment and not for prosperity. Tiny snapshots of ordinary lives and day to day activity, still visible after thousands of years. There is something quite compelling about it.

There is much to be gained from reading this appraisal of the ancient mindset even though the bulk of it is clearly masculine in origin. The lessons are subtle, and the reader might find he learns more from a second reading of the author's work, who prefers to derive rather than speculate from the messages and evidence of former times. Thankfully Peter Keegan is very adept at concise explanation, thus the meaning of the graffiti is not lost on the reader.

One is left with an oddly detached feeling, partly induced by the academic style of prose, partly by the remoteness of graffiti itself. Identification and sympathy are part of the graffiti phenomenon on both ancient and modern eras, either describing or symbolising ideas and emotions relevant to the period. Of course you might not agree with the message or the reason why it's there, another aspect of human social behaviour in that some of the ancient advertisements also come with warnings not to erase them. Many of the featured messages are contextually foreign to us even if we translate them, for the societies featured are not the same as our own contemporary enviroment however much we enjoy drawing parallels, and people who lived in those times saw the world in a different light.

Finally you will reach the end of this book. Graffiti In Antquity is a volume that benefits the reader by repeated perusal, the lessons subtle yet important. So as you close the covers one last time, picture again the street you first imagined and the activity both at day and night. You will certainly see that scene in far better definition and detail, a lost world in action, and that is the success of this book.