Lucullus: The Life and Campaigns of a Roman Conqueror 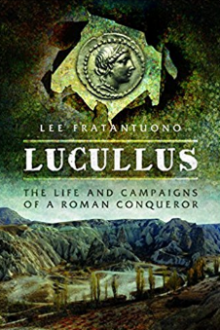 Lee Fratantuono's book, the latest in a long line of intriguing Pen and Sword military biographies, has two main goals. Most importantly, it seeks to popularize the life and times of Lucius Licinius Lucullus, a neglected figure of the Roman Republic. It is not an academic work, but is written in a concise, accessible style that assumes little specialized knowledge on the part of the reader, making it a worthy introduction to the subject. Secondly, it engages with the (admittedly slim) scholarly literature on Lucullus, sometimes offering different interpretations of key events, and emphasizes military history.

Fratantuono persuasively explains why, despite his successes, Lucullus remains forgotten. Partly it was his own fault. Mostly it was a matter of politics. Lucullus was a strict Catonian who struggled to reconcile himself to the political decay - and violence - of the Late Republic. This book illustrates how younger, more ambitious commanders like Pompey and Caesar actively disliked him or thought him an anachronism. They excluded him from political alliances and key military positions; their victories in Spain, Egypt, Gaul, and the Mediterranean eclipsed Lucullus's own. This sometimes prejudiced ancient historians against him, an attitude repeated by many modern historians, ensuring that even those with great interest in Roman military history have only the vaguest idea who Lucullus was and why he was significant.

This is lamentable, Fratantuono argues, because Lucullus was not only a military man: he was a prominent philosopher and patron of the arts, too. From a young age, Lucullus was attracted to Greek culture. By adulthood, he was fluent in Greek, and actually wrote an acclaimed history of the Social War (that no longer survives) in that language. Far more than most Romans, especially soldiers, Lucullus embraced Greek philosophy, specifically Epicureanism. Probably he knew Lucretius personally. He definitely knew Cicero: the latter had such great respect for Lucullus that he named one of his epistemological works after him. In later life, Lucullus amassed an enormous library full of rare manuscripts, which he encouraged people - Greeks especially - to peruse at their leisure.

In highlighting Lucullus's philosophical interests, this book explains a number of issues that have sparked controversy from Lucullus's lifetime to the present. To take one example, during the Mithridatic War Lucullus apparently enabled the enemy king to escape. This has prompted some to condemn him as an inept commander or a traitor. In fact, it was a matter of pietas. Lucullus did not avoid capturing the king; rather, he refused to coordinate his forces with a certain unsavoury Roman commander to capture the king, which enabled his escape. Lucullus, Fratantuono stresses, had a strong moral compass, a commitment to virtue that distinguished him from many if not most of his contemporaries. In a sense, Lucullus embodied the values of Republican Rome - both its positive and negative features - so much so that readers can learn a lot about the rise and fall of Republican Rome by reading about the rise and fall of Lucullus.

Perhaps the only downside of the book is its shortness. If it only dealt with military themes then this would not matter so much. But in emphasizing Lucullus the Philosopher, and stressing that he was writing for a popular audience rather than for academics, Fratantuono really should have explained philosophical concepts more clearly. For example, he says that Lucullus was a committed Epicureanism but does not properly discuss what this philosophy was and why he believed it. He does not point out or explain why Lucullus's worldview, especially his pietas, seems closer to Stoicism than to Epicureanism. If ever there is a second edition, a greater emphasis on philosophy (even as an appendix) may be beneficial.

Yet these are very minor issues. In sum, Lucullus: The Life and Campaigns of a Roman Conqueror is a wonderful book that is highly recommended.