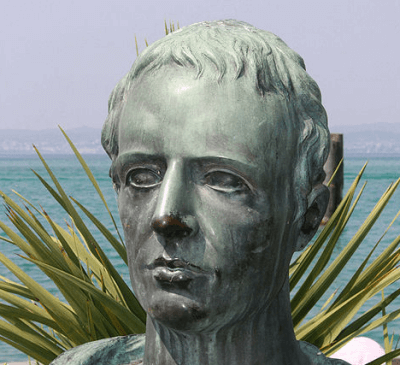 Gaius Valerius Catullus lived in interesting times. Born around 84 BCE and deceased sometime after 55 BCE (both dates as best as scholars can determine), those three decades witnessed the upheaval of the Republic in a political sense. For Catullus' childhood saw the dictatorship of Sulla and its proscriptions, and his death occurred at the height of the first Triumvirate. The groundwork had been lain for the subsequent civil wars that would end with empire and pseudo-monarchy. But Catullus was not especially a creature of war and politics - and this fact alone ushered in a new era of Roman culture. Catullus himself helped inaugurate the death and rebirth of old Roman culture under the auspices of increasing Hellenization.

Catullus was the son of a landed family from the provinces - in his case Verona in the Venetian lands of Cisalpine Gaul. Perhaps of Illyrian extraction, the Veneti lived a life of commerce and horse breeding on fertile plains. They resisted both Celts and Etruscans to become a staunch ally of Rome against Gaul and Carthage. By 89 BCE they likely had Latin rights and would receive full citizenship a generation later.

Catullus' father was apparently a wealthy enough local aristocrat to entertain Julius Caesar. But the young poet did not care to entreat the future dictator, whom he found arrogant and contemptuous. Catullus would take occasional snipes at Caesar and his henchmen:


I am none too keen to wish to please you, Caesar,
Nor to know if you're a white man or a black.
Poem XCIII


But after Caesar extended the poet clemency, Catullus readily made amends, and the two were said to have dined together.

Not much of the poet's life is known, He was sent to Rome fairly early to finish his education, ostensibly for a political career. Catullus, like many young equestrians, served on the staff of a provincial governor. In the poet's case his duty was with propraetor C. Memmius in Bithynia In 57 BCE. Catullus would later record he did not enjoy his service; there were little opportunities to enrich himself, and the propraetor was not well liked by his staff:


Once arrived there we got talking
On various topics, including
Bithynia - how were things there now
And had it made me any brass?
I answered straight - there was nothing now
For praetors themselves or their staff,
Why anyone would come back flusher,
Especially when a shit's your praetor,
Who doesn't give a toss for staff.
Poem X


No further public service is recorded for the young Veronian. Instead he turned his attentions to burgeoning cultural forces at work within the Republic.

While Rome had ties with the Hellenic world from the very beginning of its history, via the Greek colonies in the south of Italy, by the time of Catullus foreign conquests and increased commerce had brought a wave of Hellenization to those Romans educated enough to appreciate it. A kind of restless, avant-garde youth had developed with Hellenistic culture in mind at the expense of traditional Latin mores.

Those who expressed such outlets in literary terms were scorned by Cicero as the neoteroi, the new poets. While not forming a definitive circle with a coherent agenda, the neoteroi were nonetheless a relatively small brood of mostly friendly acquaintances. The majority like Catullus came from Cisalpine Gaul, and were thus not completely Romanized, perhaps allowing for greater receptiveness to non-Roman modes of thought. The neoteroi looked to Hellenistic poetry for inspiration, particularly to the Alexandrian school as exemplified by Callimachus. Callimachus had railed against Homer, both in content and style. He preferred shorter and more light hearted constructions to large epics. So too did the neoteroi protest against the standard Latin works at the time.

But it was more than a revolt against style; the neoteroi were seeking for themselves a new lifestyle as well. The mos maiorum held political and military service above all else. But the young new poets sought happiness in something besides duty to the community (civitas). They wanted a life of leisure (otium), to bask in private relationships and refined pleasures. In this they held something in common with the philosophy of Epicureanism. But while the Epicureans frowned on the excessive emotional attachment of passionate love, for some neoteroi romance was the driving force of their quest for personal fulfillment.

Catullus himself looked to inspiration from Sappho, the female poet from the isle of Lesbia who wrote famously of women's affections for each other. The centerpiece of Catullus' poetry would be his unquenched desire for a female figure he aptly names Lesbia. This Lesbia has been identified by a later writer as a Clodia, whom scholars usually equate as the sister of the infamous tribune P. Clodius Pulcher and the wife of a consul, Q. Caecillius Metellus Celer. But unlike Hellenistic poetry, which treats love as light affairs, Catullus's poetry reveals an unassailable desire for endless love with this women, and subsequent hurt as the latter's treachery:


Lesbia, my will has sunk to this through your frailty
And so destroyed itself by its own kindness.
That it could neither like you, even though you were perfect,
Nor cease to love you though it stopped at nothing.
Poem LXXV


I hate and love. Perhaps you're asking why I do that?
I don't know. But I feel it happening, and I am racked.
Poem LXXXV


Clodia was not only physically attractive, but intelligent and sophisticated. She was also conniving and promiscuous. Cicero, though not exactly an unbiased source, paints a dark picture of her. She was not a typical Roman women. But Catullus, as we have seen, was not a typical Roman male. He is intrigued by her wiles even as he is devastated by her infidelity. Clodia presages the sexually liberated upper class Roman female that would become increasingly common in the empire, while Catullus presages the imperial social dandies whose chief occupation would be to indulge in ambivalent and adulterous love affairs with said women:


No woman can say truly she has been loved as much
As Lesbia mine has been loved by me.
No faith so great was ever found in any contract
As on my part in love of you.
Poem LXXXVII


Catullus writes in three main styles. He writes sixty short poems with lyrics or in iambic. There are then eight larger poems which vary in type of meter. Finally, he composed some epigrams. He combines elegant Latin with everyday speech, all the while inspired by Alexandrian poetry. In addition to his love for Lesbia and occasional political invectives against Caesarians, Catullus also writes on mythology and religion, and aims some rather humorous jibes at a variety of people:


If the curst arm-pit goat rightly harmed anyone
Or hobbling gout deservedly torments,
That rival of yours who works away at your shared love
Has caught both troubles wonderfully aptly.
Each time he f***s he punishes the pair of them -
Sickens her with stench and kills himself with gout.
Poem LXXI


Catullus' embrace of Hellenism to transform and transcend traditional Roman mores and styles would color the emerging Augustan age. Propertius and Ovid were, like Catullus, provincial equestrians who eschewed a public life in favor of lascivious otium; their elegies are enormously indebted to the Veronian poet. Later Christian Rome had little use for Catullus' poetry, which all but disappeared in the Middle Ages. It was re-discovered and better appreciated with the Renaissance. Many moderns find his works easily accessible two millenia later.

Did you know...
Catullus' father was, according to Suetonius, a friend of Julius Caesar.