Part I: Life and Times 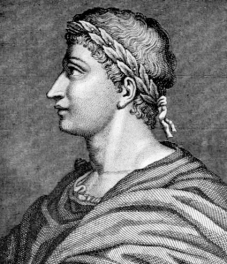 Sometimes it seems remarkable Rome produced anything resembling high art. The proper role of an upper class male was service to the community in a legal and political capacity; those on lower rungs could content themselves with agriculture or commerce. Then of course for both sorts there was virtus; the courage and physical excellence (manliness) displayed in a battlefield against the enemies of Rome. Arts were regulated to secondary status. Actors, for instance, were often considered little better than prostitutes, a sign of decadence of effeminate Greek culture.

Conquest of the Hellenistic realms changed attitudes slowly and to a degree. Roman politicos began realizing that art could service them in the same capacity it had serviced Hellenistic elites: as a measure of self-promotion. Augustus, a Hellenistic monarch masquerading as a Roman magistrate, understood this better than anyone. His lieutenant Maecenas effectively functioned as the minister of culture, patronizing poets such as Virgil and Horace whose literary talents could immortalize and flatter the greatness of Rome and its regime. Art was promoted if it served patriotic ends - if it praised the Caesars, legitimized the empire's politico-military hegemony with divine favor, or extolled the bucolic worth of the Italian farmer and his fields.

It is with that backdrop in mind one needs to consider Ovid and his career.

Publius Ovidius Naso was born in Sulmona in 43 BCE, east of Rome in a region whose people were known as the Paeligni. The Paelignia region had served as a capital in the Italian revolt against Rome during the Social War, but upon surrender its inhabitants were granted citizenship and enjoyed cordial relations with the city on the Tiber. The region sided with Caesar during his struggle with Pompeii, and thus Caesar's heir was well disposed to the area. Augustus saw that its municipal elite were inducted into the Equestrian order and groomed for eventual entry into the Senate.

Ovid was the younger of two brothers born to such a promising family. He received a requisite basic education in his hometown, apparently taking a liking to poetry at an early age at the expense of his formal studies. From there he was sent to Rome to finish his education, and seems to have excelled at rhetoric. It was in the Eternal City he came under the patronage of Marcus Valerius Messalla Corvinius. Messalla was a historian and orator; he had also been Consul, and served under Octavian at the battle of Actium. He also had the distinction of being the first City Prefect, a position he resigned five days later as it was supposedly too autocratic. More importantly for our purposes, Messalla was a facilitator of a circle of poets. Ovid seems to have fallen under the spell of this literary atmosphere furnished by his patron.

With Ovid's father badgering him to forgo useless poetry, he completed a legal education after having been awarded the broad, purple striped toga of the Senatorial class. He toured Greece with a companion - the so-called Grand Tour of upper class Roman youths. Ovid then held several minor legal and administrative posts in the first obligatory rungs of the cursus honorum. Significantly, however, Ovid did not hold a standard post as a military tribune - he may have been physically unfit for service. In any event, once his father died, Ovid abandoned all pretense of a Senatorial career.

Ovid is the last of the Augustan age poets and is beyond the horrors of civil war experienced by his predecessors. He could take the Pax Romana for granted, never having served in a military capacity. Unlike many cultural elites before or since, he seems to have completely embraced his era - carefree and basking in the spoils of peace as it was. His poems are on the whole lascivious and wanton. He writes unabashedly on sex and seduction, even going so far as to write a didactic handbook on the matter. He revels in adultery, and compares sexual conquest as being equal in its own way to military service.

Such an attitude was bound to run afoul of the moralizing nature of the regime. Augustus had seen laws passed to discourage adultery and encourage a higher birth rate among Rome's upper classes - the infamous Lex Iulia de adulteriis coercendis. The rebel poet, though very popular with the masses, was not held in high esteem by the establishment. He had retreated from a life of public service to pursue the vita umbratalis - the poet's life of shady pleasures. Furthermore, his poetry seemed decidedly counter-cultural.

In 8 CE Ovid was banished from Rome to a barely Hellenized town on the Black Sea at Tomi, to endure uncouth barbarians and stormy weather until he died 10 years later. His Art of Love was also banned from Rome's three public libraries. Ovid claims that while his poetry earned him the establishment's displeasure, his banishment was more inspired by something he witnessed. What precisely that vague something is remains a mystery to scholars. It is conjectured he was involved with the affairs of Augustus' scandalous granddaughter, Julia the Younger. Others theorize he may have had knowledge of a conspiracy against the succession of Tiberius, and failed to promptly report it to the authorities.

Ovid was married three times. The first was in his teens. In the only line referencing her, Ovid claims to have found her wanting, and they were divorced. This affair may or may not have served as the inspiration for the literary figure of Corinna that appears periodically in his poetry. The second marriage ended in divorce rather quickly as well. Only the third marriage seems to have afforded him anything resembling connubial bliss; this wife, connected with the Fabian clan, lobbied for his return during his exile from Rome. Ovid's only mentioned offspring was a single daughter and two grandchildren.

By the time of Augustan Rome, a "love elegy" had developed, to use a phrase coined by modern scholars. Refined especially by the poets Tibullus and Propertius, the type of elegy has the poet enslaved to the love of a female figure. Withdrawn from the glories of a public life, the poet becomes trapped into an all-consuming private passion. Yet the female figure taunts him and toys with him; he stands outside her door bemoaning her cruelty, the so-called paraklausithyron. He feels rejected and bitter. But he is a soldier in the war of love, and will endure onto the end.

Ovid used the skeleton of elegy for his poetry, but imbued it with his own flesh. For he is, so he says, not enslaved to a particular female figure. He finds seduction all a game. It is an intellectual exercise bereft of emotional attachment. He is more than happy to write a handbook for men on the art of seduction, and in the same handbook will even condescend to offer advice to women. Other men are pathetic souls trapped in a love that can never be fully entertained, but Ovid finds the whole charade an amusing sport.

Did you know...
Tomi, where Ovid was sent into exile, was a garrison town in Roman colonized Dacia.