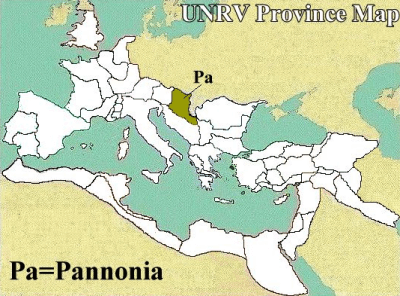 The Roman province of Pannonia was bordered along the Danube to the east and north, with Noricum and Northern Italia to the west, and with Dalmatia and Moesia to the south. Its original inhabitants (Pannonii, sometimes called Paeonii by the Greeks) were an Illyrian tribe. From the 4th century BCE it was invaded by various Celtic tribes, the largest of whom were the Carni, Scordisci and Taurisci.

In the early first century BCE, Roman penetration into Raetia, Noricum and Dalmatia moved towards the Danube and Pannonia. The Celtic Scordiscis and Dardanians posed an obstacle to this advance. A hard fought war with the Dardanians, lasting 3 years, enabled Gaiuss Scribonius Curio to be the first Roman general along with his Legion to see the Danube in 73 BC.

Little else is heard of Pannonia until 35 BC, when its inhabitants took up arms in support of the Dalmatians who were at war with Rome. This led to an invasion by Augustus, who conquered and occupied Siscia (Sissek). The country was not, however, definitely subdued until 9 BC when it was incorporated with Illyria, the frontier of which was extended as far as the Danube.

In 7 AD the Pannonians, with the Dalmatians and other Illyrian tribes, revolted, but were eventually overcome by Tiberius and Germanicus, after a hard-fought campaign which lasted for two years. In 10 AD Pannonia was organized as a separate province. The proximity of dangerous barbarian tribes (Quadi, Marcomanni) across the Danube necessitated the presence of a large number of Legions and Auxiliaries and numerous limes (fortifications) were built on Roman side of the river.

Some time between the years 102 and 107 AD, which marked the termination of Emperor Trajan's Dacian wars, Trajan divided Pannonia into 2 provinces, superior in the west and inferior in the east. The whole country was sometimes called the Pannonias (Pannoniae). Pannonia superior was under the consular legate, who had formerly administered the single province, and had three legions under his control: Pannonia inferior at first under a praetorian legate with a single legion as garrison.

After Marcus Aurelius it was governed under a consular legate, still with only one legion. The frontier on the Danube was protected by the establishment of the two colonies, Aelia Mursia (Esse) and Aelia Aquincum by Hadrian. In fact, Hadrian was the first governor of Pannonia Inferior and later as emperor, the region became one of the favorite destinations in his many travels.

Like many other Roman provinces Hadrian instituted a great many building projects in the region, the Danube fortifications, roads, temples, aqueducts, theatres, etc. that helped to Romanize the inhabitants. Vindobona, modern day Vienna, a former military camp, also began to grow in importance during this time period.

The Marcommanic Wars of Marcus Aurelius showed the great importance of Danubian frontier and Pannonia often became the permanent headquarters of Roman Emperors or their appointed deputies during the 2nd and 3rd Centuries. Legio I & Legio II Adiutrix, Legio X & Legio XIV Gemina were mainly stationed in Pannonia.

The great migrations and invasions of Goths and Huns of the 4th century led directly to increased Germanic pressure on the region. Displaced tribes sought refuge within the Empire's borders, but suitable agreements were never really reached. By 378 AD, at the Battle of Adrianople in neighboring Thracia, the Goths crushed the army of Valens, effectively destroying Roman control of the Balkan province.

Except in the mountainous districts, the country was fairly productive, especially after the great forests had been cleared by Probus and Galerius. Before that time timber had been one of its most important exports. Its chief agricultural products were oats and barley, from which the inhabitants brewed a kind of beer named sabaea. Vines and olive-trees were little cultivated. Saliunca (Celtic nard) was a common growth, as in Noricum. Pannonia was also famous for its breed of hunting-dogs popular in hunting wild boar and bison. Iron and silver mining was also prevalent.

The inhabitants of Pannonia were described by Roman writers as brave and warlike, but cruel and treacherous. Polybius even suggested that the Scordisci used human skulls as drinking cups. There were several tribes of significant size and status in the area. The Scordisci, Breucis, Carni and Dardanians were early enemies of Roman expansion, but later would play an important role in defending the territory from Germanic incursions. The Taurisci tribe, spread throughout the Danube region was a long time friend and ally of the Empire.

Did you know...
In the middle of the 5th century Pannonia was ceded to the Huns by Theodosius II, and after the death of Attila successively passed into the hands of the Ostrogoths, Lombards, Avars (560's - c.800), Slavs (c.800 - 900) and Hungarians (since 900/901). The ancient name Pannonia is retained in the modern term Pannonian plain. Today, Pannonia is largely identical with what is called "Transdanubia" (in Hungary).