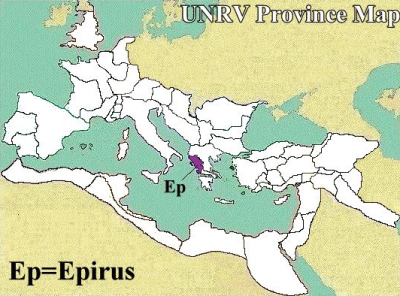 Epirus is a name applied to an area bordering the Ionian Sea that is shared by modern Greece and Albania. In the northern part, which remained in Albania after diplomatic talks by the Great Powers in 1913/1914, there are Greek minorities, while in the southern Greek district there are Albanian minorities.

In ancient times Epirus ("mainland" as opposed to the offshore islands) was the mountainous coastal district bordered by Illyria, Macedonia and Thessaly. To the south was Aetolia. Epirus was separated from Illyria to the north by the Ceraunian Mountains, and by the river Pindus River. The Acheron river, which was believed by ancient greeks as a river of Hades, flowed through this region, and here stood also the oak grove of Dodona, sacred to Zeus and famous for its oracles.

Epirus was the coastal region of northwestern Greece and southern Albania with Illyrium to the north and Macedonia to the east and was home to the Epirote tribes which were little known by the Greeks at the time. At the time of Homer (8th Century BC), Epirus was known as the home of the oracle of Dodona. The region was also home to the Oracle of the Dead on the Acheron River.

Epirus was the launching area of the Dorian invasions (1100-1000 BC) of Greece, which along with civil wars and environmental upheaval helped lead to the Greek Dark Ages. Greek culture, however, would retake dominance by the 9th Century BC. In the 5th BC century Epirus was still on the periphery of the Greek world. To the 5th-century historian Thucydides, the Epirotes were "barbarians." The only Epirotes regarded as Greek were the Aeacidae, who were members of the Molossian royal house and claimed descent from Achilles.

From about 370 BC on, the Aeacidae were able to expand the Molossian state by incorporating tribes from the rival groups in Epirus. The Aeacidae's efforts gained impetus from the marriage of Philip II of Macedon to their princess, Olympias. Late in 334, while Alexander the Great, son of Philip and Olympias, crossed into Asia, his uncle, Alexander I of Molossia answered a call for help from Tarentum whereupon he crossed to southern Italy with a small force to fight the Lucanians. The campaign was initially successful and a treaty with Rome is reported, but Alexander I met his end in 331 when defeated by the Lucanians. The king himself was reportedly killed by his own bodyguard which just so happened to be formed by refugee Lucanians. After Alexander I the Molossian's death, the Epirote tribes formed a coalition on an equal basis but with the Molossian king in command of their military forces.

In 281 the Italian city of Tarentum asked for Pyrrhus' assistance against Rome. He crossed to Italia with about 25,000 men including elephants which would be a later source of inspiration for Hannibal in the Punic Wars. In 280 BC he won a complete, if costly, victory over a Roman army at Heraclea. In 279, Pyrrhus, again suffering heavy casualties, defeated the Romans at Ausculum in Apulia. These victories would become synonymous in later history with the term "Pyrrhic Victory", in which the cost of victory was worse than those he defeated.

In 278 BC he crossed to Sicilia, and conquered most of the Punic province except Lilybaeum (Marsala). However, his despotic methods offered a very short term rule that provoked a revolt of the Greek Sicilians. In 276 (or early 275) he was forced to return to Italia. In 275 he suffered heavy losses in another "victory" against Rome at Beneventum.

The next year upon returning to Epirus, he invaded Macedonia, drove out Antigonus II Gonatas to Thessalonica, and took over the defecting Macedonian army. He abandoned the new victories in Macedonia, however, and launched an unsuccessful attack on King Areus of Sparta to restore Cleonymus (272 BC) to the throne there. Violations of royal tombs by a garrison of Gauls at Aegae offended the Greeks, and Pyrrhus went south to invade the Peloponnese, leaving his son Ptolemy in command.

While occupied in the south, Antigonus Gonatas regained control of Macedonia and transported an army by sea to Corinth against Pyrrhus. At about the same time, Pyrrhus' son Ptolemy was killed in an ambush by the forces of King Areus of Sparta. At Argos Pyrrhus was trapped between the armies of the Macedonians and the Spartans and killed. Pyrrhus' military adventures overstrained his state's military resources, but they also brought great prosperity to Epirus during his reign. After his fall, however, Epirus was left in a near state of ruin. His Memoirs and books on the art of war were quoted and praised by many ancient authors, including Cicero.

In 232 BC the various tribes created the Epirote League transformed the Kingdom into a Republic. Over the next half century it was caught between the warring powers, Rome and Macedonia. During the 3rd Macedonia War (171-168 BC), the Molossian Epirotes supported Macedonia and the League would fall apart. Rome, under the command of Aemilius Paullus, sacked the country in 167 BC and took 150,000 inhabitants as slaves. Epirus became a Roman province soon after and the coastal regions would prosper under its rule.

In 31 BC, one of the most important battles in the history of the world took place off the shores of Epirus to preserve the regions place in history. While not a major battle in terms of numbers of men or ships, the naval Battle of Actium, would decisively give Octavian Caesar control of the seas against his rivals Marcus Antonius and Cleopatra of Egypt. Over the next few months the victories for Octavian continued and he would soon be crowned as Augustus, the first Emperor of Rome.

Epirote tribes were mostly Hellenized (adapted to Greek culture) Illyrians. Unlike other Greek peoples who lived in or around large city-states, the early Epirotes lived in clusters of small villages. The Chaoni resided in northern Epirus, and the Thesproti in the South. Both were members of the Epirote League that allied with Rome during the Macedonian Wars. The most powerful of the tribes, the Molossi, were the dominant players in Epirus. They formed the early dynastic kingdoms of the region and were the ruling class prior to Roman conquest. They supported Macedonia against Rome and paid the price in the slavery of its people.

Throughout the occupation the Greek States were mostly content with Roman rule. Several civil wars saw them side with one faction or another, but still it was under Roman control. Greece was expected only to provide goods and revenue along with obedience, and was afforded a fair amount of autonomy. Copper, asphalt, and silver were extracted from the northern mountains and other exports were wine, cheese, and oil. Epirus remained a part of the Roman and Byzantine Empires until the 11th century AD.