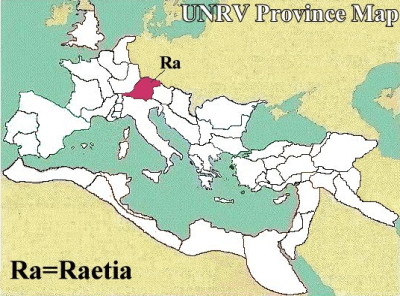 Beginning around 800 BC the Raetians started to colonize the area now known as Switzerland, Liechtenstein, and western Austria where the Helvetians were already prominent.

The Romans began incursions into Raetian territory in 107 BC by way of the St. Bernard Pass, but in light of the difficulty of the terrain, their conquest of the area was never decisive.

By 52 BC, the Germanic tribe assaults from the north caused the Helvetians to attempt to abandon their homes and migrate towards southern Gaul. Roman Legions, under the command of Julius Caesar, blocked their way and forced their return.

By 15 BC the Romans had pushed north over the Alps under Tiberius and Drusus, stepsons of Emperor Augustus. Their army defeated the Raetians, and Raetia was formally incorporated as a Roman province. However, further to the north and east the Germanic tribes had been steadily moving toward this new Roman territory, forcing it to build a series of defense works and continue to advance farther north.

The Romans built a road from the south over the Mountain passes to the north and along the east bank of the Rhine. Roman Villas and fortifications were built at present day Schaanwald and Nendeln to protect the road across the alpine passes from attack.

After the crushing and legendary defeat of Publius Quintilius Varus, and 3 full legions, by Arminius and the Cherusci in the Teutoburg Forest in 9 AD, Rome did not try to expand any further across the Rhine for some time. Later campaigns by Germanicus would bring relative peace to the area for some time, but always uneasy at best. To protect Roman colonies in Raetia, the Legions built and garrisoned a series of fortifications called Limes.

The Limes to the north and east in the Roman province of Germania Superior were a high spiked wooden fence with a ditch or moat. Just behind that was a thick stone wall with high wooden watch towers. Smaller fortifications housing the Auxiliary, Cohorts, and Alen, were established behind the wall. These troops called out only in case of serious attack by the German tribes. The Limes in Raetia was a single stone wall with manned watchtowers.

The inhabitants of the Liechtenstein valley and Raetia became quite romanized during the Imperial years. Roman divinities were worshiped instead of the old Celtic Gods. Commerce increased and agriculture flourished.

Vineyards were planted on the mountain slopes. Buildings were built with under the floor heating, running water and sewer disposal. Except for the occasional raid, life in the valley must have been peaceful and prosperous.

From AD 98-117 Roman legions pushed the "Pax Romana" beyond the Rhine to the Main and Danube Rivers. For a time the Germanic tribes were held at bay and an uneasy peace would exist between Rome and these tribes upon the death of Marcus Aurelius. That peace, however, would always be tenuous at best. Legio III Italica, recruited by Marcus Aurelius for the war against those tribes between 166 and 174 CE, was permanently stationed in Raetia. Numerous Auxiliaries were garrisoned among the limes and fortifications as well. Despite their best efforts, though, the Romans would be overrun by the great migrations of Germanic tribes by the late 4th and early 5th centuries.

The land was very mountainous, and the inhabitants, when not engaged in predatory expeditions, chiefly supported themselves by cattle-breeding and cutting timber, little attention being paid to agriculture. Some of the valleys, however, were rich and fertile, and produced corn and wine, the latter considered equal to any in Italy. Augustus preferred Raetian wine to any other. Considerable trade was also carried on in pitch, honey, wax and cheese.

Helvetii - The major Celtic tribe living in Switzerland. Ariovistus' aid to the Sequani prompted them to want to move, something which Caesar didn't want to happen.

Tigurini - Neighbors and fellow travelers with the Helvetii on their failed migration. The Tigurini had joined the Cimbri and Teutones in the march against northern Italia during the late 2nd century BC, and fled from Sulla after those tribes' defeat by Marius.

Rhaetians - Are considered a possible Etruscan tribe from northern Italy. They settled near several Alpine Lakes and the Graubünden Alps.