by Éric Rebillard and Jörg Rüpke 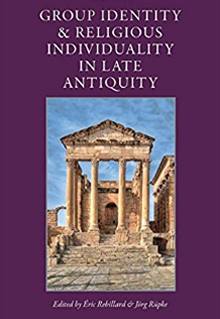 In eleven erudite essays (not all of which will be examined in this review), the authors lay out plans to examine the relationship between Christian leaders and the led, dealing for the most part with theological writings (Augustine, Gregory of Nazianzus), church architecture (sixth-century private chapels), and epigraphic data on initiation into pagan cults.

The essays attempt to apply modern paradigms of leaders and followers, and institutional orthodoxy and non-standard beliefs, in a search for examples of "wiggle room" among the laity - "the individual idiosyncrasy which falls below a threshold of conformity" (p 32). The authors reject the idea of impassible barriers between leaders and led, and posit the ideas of "constant fluidity of any community's standards of conformity," (p 51) and "simultaneous collusion and fragmentation between individuals and institutions" (p 83). The ruled, so to speak, participated in ruling.

However, the authors honestly admit the difficulties that stand in the way of defensible answers to their questions: original texts are often lost; the increasing Christianization of society "narrow[ed] the scope of possibility of individual deviations" (p 25), and it is unlikely that we can "capture the individual and his or her own experience in the remote past" (p 89). The most serious difficulty, mostly assumed rather than commented on, is that, for the most part, the only individuals who leave a mark are members of the wealthy, educated elite, whether Christian or pagan.

Such caveats reach their apotheosis in the first sentence of Wolfgang Spickermann's essay on epigraphic evidence for initiation into cults in the western provinces of the Empire from the late 3rd century onward: "The title of this chapter promises much more than it can deliver" (p 215). That said, Spickermann does extract from the evidence the plausible claims that the mostly eastern cults (Magna Mater/Cyble, Mithras) were part of the Empire's "connecting the cult to public institutions" (p 216), especially local councils (p 218), and that women were prominently involved, though not at the highest levels (p 218).

Jason BeDuhn's essay says that Augustine of Hippo remained Manichean (Christ as sage, the body as prison) for a decade after his conversion, and "later imposed conditions of Christian orthodoxy [not specified in the article] from his own idiosyncratic thinking" (p 50). These, of course, are assertions made regarding a strong-willed, rhetorically trained, charismatic leader - in short, a member of the elite, who left a record. What we know about the laity of Hippo is restricted to what Augustine chooses to tell us.

Another assertion of the same truth - elites are elites and leave their marks - comes in Susanna Elm's essay on Gregory of Nanzianus, in which she concedes that the Great Man theory of history can be useful: she portrays Gregory as a self-proclaimed mediator between God and the laity, answering his own question on theosis: "Why else had Christ become man if not to make us God?" (p 104).

Kim Bowes describes 6th-century individuals who "privatized" public worship by building private chapels in their houses and self-communing with the take-home reserved sacrament consecrated by celebrity bishops. Bowes calls the process one of "distill[ing] ritual and community into possessable spaces and objects" (p 75). Once again, this is expensive behavior, characteristic of elites.

Finally, given the vast number of admitted epistemological challenges to the authors, I am surprised that none of them sought to examine perhaps the only man of late antiquity who can provide the evidence needed to substantiate the paradigms of the book. This man, born in a Roman province in the late 4th century, lived as a member of the upper classes (his father was a deacon and a decurion), worked as a slave for six years after being kidnapped at age 16, became a missionary bishop, fought against a church hierarchy that questioned the validity of his mission to "men who do not know God," condemned local war lords who enslaved Christians, and left attested records of his life and disputes, written in functional Latin: the Confessio and Letter to Coroticus. I am speaking, of course, of the original and genuine St Patrick, and not his contemporary false incarnation as the beery friend of leprechauns.